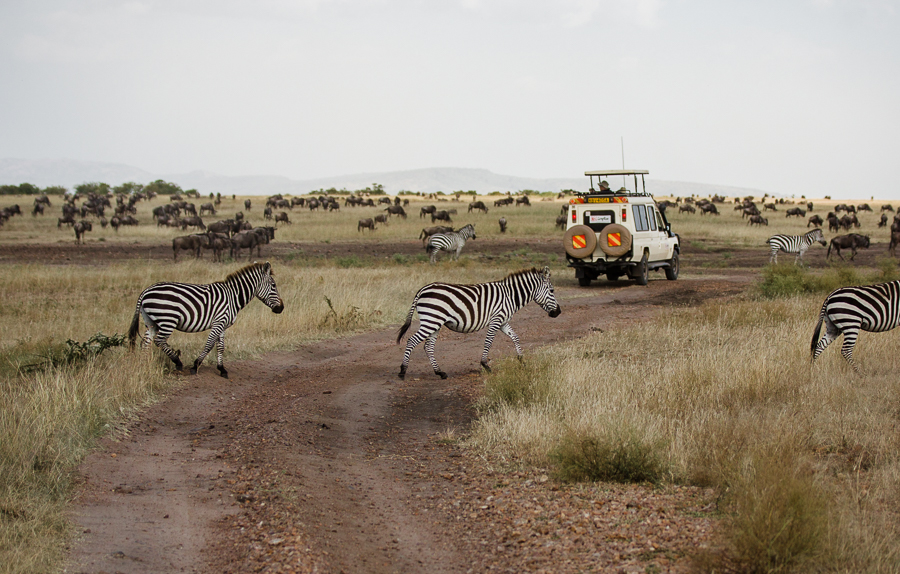 The Mara. This was a term we heard countless times when the locals would talk about going on safari. What is “The Mara”? It’s a huge game reserve that spans across Kenya and Tanzania (in Tanzania it becomes the Serengeti)  covered in grasslands. I had always wanted to go on Safari and ‘The Mara’ sounded like the perfect place.

We were pretty darn ignorant about the process of ‘going on safari’ when we arrived in Kenya and thought it would be easy to book a quick trip to see some animals. That assumption was sort of true -showing up to Nairobi with concrete plans and expecting to go on safari is a little bit more complicated than we thought though. For one, safaris are much more expensive to book than we’d assumed (whoops) and there are literally hundreds of different options to sift through! We were lucky to have someone who’d lived in Kenya for over a decade guide us through the options and walk us though the process. We ended up booking a three day trip thought a tour service and decided to drive (rather than fly) from Nairobi to Maasai Mara.

We were the only two people on our tour so our guide picked us up directly from our accommodations and we began the five hour trek to the Mara.  The first few hours of the drive were your typical African-paved-road-driving-experience but the last hour or so was the bumpiest, loudest road I have ever been on (and that is saying a lot). All Dave and I could do when we were driving was laugh, yell to each other and hold on tightly. We felt a lot of relief when we reached the game park’s smooth dirt roads. Our guide drove us straight to our hotel to check in and then we immediately left for a sunset game drive! Our guide popped the roof of our van up so we could stand and take photos for the duration of our drive. We were promptly greeted by herds and herds of zebra when we began driving through the grasslands and some of the most breath-taking views. We looked at each other several times as we hung out the roof of a van surrounded by wild life and the African sun dropping and asked, ‘are we really here???” We saw a couple of lions this first game drive, but we got better shots later on in our stay, so if lions are your thing, check back later! At one point Dave pointed out this lone giraffe on the horizon and we both freaked out a bit about our first giraffe sighting. Our guide informed us that giraffes really only go off alone if they are old and preparing to die, to that killed the mood a little, but hey, we were still excited about the giraffe! Don’t worry, we saw some giraffe families later on as well! And then the sun started to set and we couldn’t believe how beautiful the savannah looked bathed in the golden light. Beautiful, right? Even for a non-animal-lover like me the African savannah was just majestic. We will be posting more photos from the safari later, so come on back for some cheetahs!