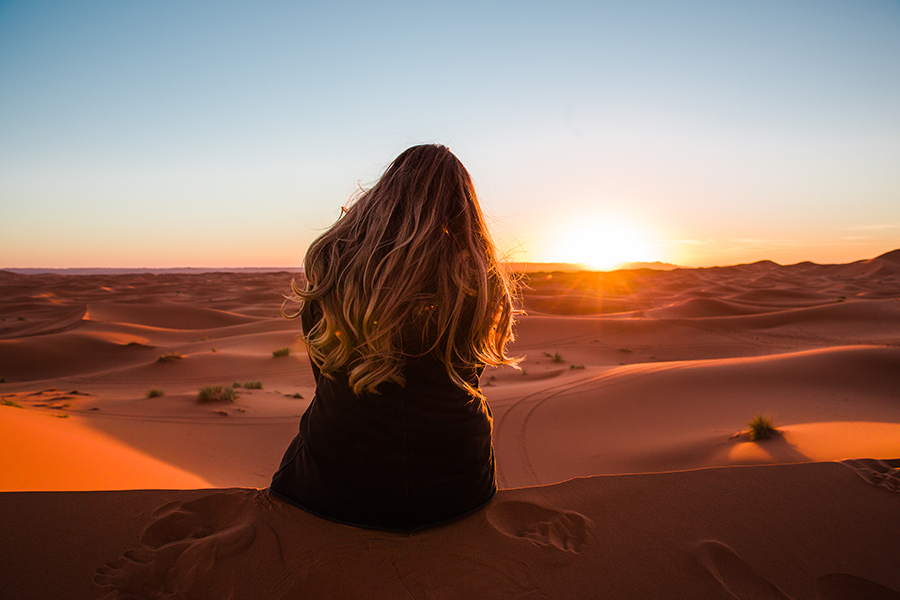 The Sahara Desert. How could a bunch of sand be so breathtaking? We were not sure what to expect out of our quick trip to the edge of the Sahara, but for some reason we were both pretty adamant that we needed to get there while in Morocco.

There are plenty of desert tours leaving from Marrakech, but the ones we found initially took tourists to smaller deserts a few hours drive from the city. We didn’t want just any desert – we wanted the Sahara. No more, no less. So, we enlisted the help of our amazing Airbnb hosts and with all of our broken French and English finally came up with a solution. In order to get to the Sahara we would need to hire a driver to take us 11 hours by car to the area around the  border of Algeria and Morocco – and we said yes.

Our 24-hour round trip drive through Morocco is a whole other blog post, so I will simply begin with when we jumped on our camels (please say you noticed our shadows in the first photo). Once we arrived at the edge of the dunes, we were rushed over to a large group of other tourists and camels to make sure we had enough time to see the sunset before it got dark. Before we could really think too much about it, we were both on top of camels without our overnight bags (they said our backpacks were too big for the camels and sent us off for the night without them). We could see some dunes in the distance, but were not sure what to expect when all of the sudden the flat terrain became this: The colors in the sand and the sky were just incredible. I could not stop taking photos of the shadows and lines created by the setting sun on the warm colored sand. After about a half-hour on the camel we realized that riding a camel was much less comfortable than we would have liked – but we pressed on. Some of the other people in the group opted for riding on the roofs of small SUV’s instead of a camel ride (we were a little jealous). After about an hour or so on the camels we came to a high point and were told to get off the camels to watch the sunset. It did not disappoint. I think the photo of Dave below will always be one of my favorites. The colors in the sky once the sun set were just amazing. I had to at least try to shake all of the sand out of my hair, but that was a joke. I am still finding sand in the bottom of bags and in between zippers. After watching the sunset, we got back on our camels to head to camp. When we got to camp we just had to laugh. Our safari experience over this past summer really spoiled us and we thought that when they said “tent camp” we would find beds and running water. Not so. We found ourselves sleeping on the sand with a bunch of blankets inside these tents. Did you know that it can be about 30 degrees and freezing in the desert? We sure found out. However, the stars along were worth the freezing temperatures and lack of bathrooms. Being surrounded by stars and dunes felt very other worldly. (I might have talked a lot about how I felt like I was in a Star Wars movie and referenced Rey many times with sitting on dunes). Our guide woke us up around 5 am and helped us on to our camels while it was still dark so we could watch the beautiful sunrise over the dunes. We were pretty dang excited when our hour long morning camel trek was over and we got to brush our teeth, but we promise the Sahara was worth it!  What a gorgeous, gorgeous place. 8 thoughts on “The Sahara Desert”